Back for more Fish and Chips 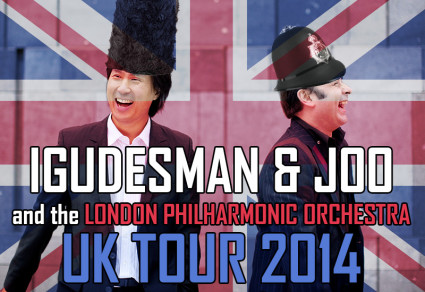 Hailed as “Mozart meets Monty Python” Igudesman & Joo return to their creative birthplace! And this time they’re not alone, but with none other than the majestic London Philharmonic Orchestra!

This autumn sees musical comedy duo Igudesman and Joo embark on their first UK tour of their hit show, BIG Nightmare Music, with the London Philharmonic Orchestra. Classically trained musicians Aleksey Igudesman and Hyung-ki Joo have taken the world by storm with their hilarious shows, which put a unique slant on well-known classical pieces. It is time they return to the land where they first forged their artistic careers.

Check out all tour dates at BandsInTown!

One week in the world of I&J! Wouldn’t you love to see what we’re doing all day while we’re on tour or preparing for our next big show? Concerti magazine is accompanying IGUDESMAN & JOO for one week – with videos, pictures, and interviews from our Germany tour. Like their facebook page to follow their series “In der Welt von…” (in the world of). Starting on March 1, the day of our “AND NOW MOZART” debut in Hamburg! There are still tickets available – click here!
Check out concerti’s website for more of their awesome stuff!

In concert with the WKO

On tour in Germany

No excuses this time! We’re playing six different cities in Germany in February and March! Shows range from our famous “A Little Nightmare Music” to our new duo show “AND NOW MOZART” and even our orchestra show “BIG Nightmare Music” with the Württembergisches Kammerorchester Heilbronn in Stuttgart!
Come see us in Essen (27.2.), Düsseldorf (28.2.), Hamburg (1.3.), Munich (2.3.), Stuttgart (17.3.) and Fürth (25.3.)! See all our show dates and ticket links on bandsintown: www.bandsintown.com/igudesmanandjoo

Return to the Tonhalle Zürich 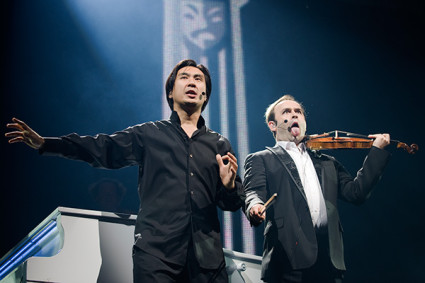 We’re back in Switzerland! After last year’s successful concert with the Zürcher Kammerorchester we’re now bringing our duo show “A Little Nightmare Music” to Tonhalle Zürich. Click here for tickets! See you there on February 14! 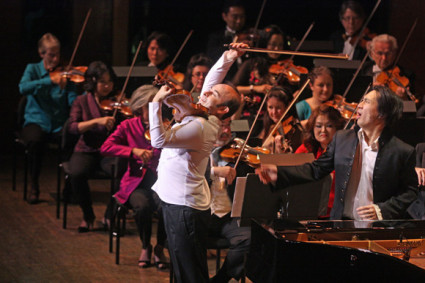 “Classical music in America is dead.” The New Yorker examines this claim made by Mark Vanhoenacker. William Robin concludes in this article from January 29 that America’s admiration for classical music has been prevalent longer than most other cultural phenomena. We feel honored to have a picture of us picked for a piece of work arguing for the relevance and continuing excitement of classical music!

A Feast of Duos – duo competition at Sion Festival

The Sion Festival hosts for the first time “A Feast of Duos”, a violin/piano duo competition with support and participation of IGUDESMAN & JOO. The contest will take place during the Sion Festival in August 2014 and winners will be awarded a range of prizes, including the IGUDESMAN & JOO prize for excellence and creative performing. Click here to find out about details of the competition and how to apply! 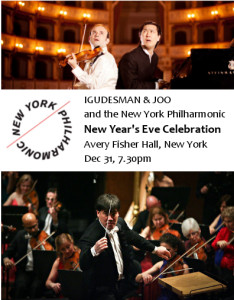 The end of the year is coming closer and there is no better way to give it a fine farewell than with the most exquisite New Year’s Eve gala concert in the whole world – IGUDESMAN & JOO with the New York Philharmonic at Lincoln Center, New York. Maestro Alan Gilbert will conduct this special event on December 31, 7.30pm. We will have a special guest on stage, too!
For tickets please click here! 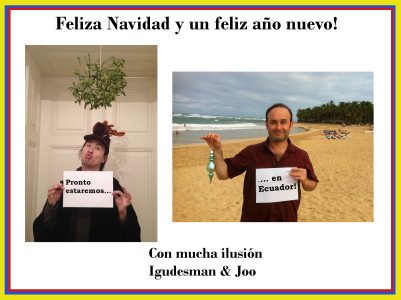 There’s always time for a first! In our case, January 2014 will be the time for our first performance in Ecuador! In fact, we will play two concerts: January 28 in Guayaquil, and January 31 in Quito. We’re excited!