“Everything you wanted to know about Classical Music” TV premier 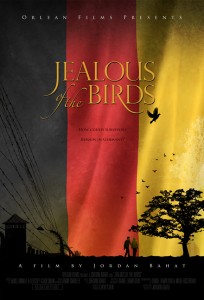 Jealous of the Birds, currently in post-production, is a feature length documentary that provides a new angle and new stories to the pantheon of Holocaust related documentaries. The film focuses on the emotional history of a small community of Holocaust Survivors who remained in Frankfurt, Germany after liberation from Nazi death camps, and asks the question, ‘Why would a Survivor choose to remain in Germany — shoulder to shoulder with their perpetrators?’
Hans Zimmer and Aleksey Igudesman are responsible for the film’s film score.

Jealous of the Birds Homepage

Joo receives belated Oscar for his small role – but only role small! – Watch the Video. 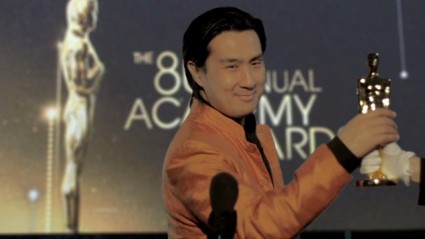 What a surprise! Joo receives the Oscar for the best supporting role in the movie “Blitzblau”, where he and his partner in music and comedy, Aleksey Igudesman both acted. However, this does not mean that Christoph Waltz has to return his Oscar. A spokesman from the academy says: “We have made a big mistake in ignoring Joo’s spectacular acting. This should not belittle Waltzes brave effort in Inglourious Basterds. However we all know who the real winner is!”

When asked whether he was sad to have been overlocked, Igudesman remarked: “I am merely happy that an actor of such stature as Joo, who I am lucky to be working with for many years, finally gets the attention he deserves. And at the cost of sounding arrogant, my year will come!”. Igudesman played a choleric Russian film producer, whereas Joo played a Korean tourist in Vienna in “Blitzblau”. At this time, Joo was not available for comments.

Watch the video of it here: 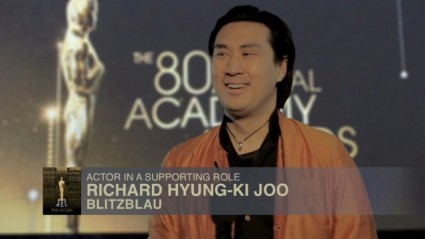 Keep it coming and keep coming! 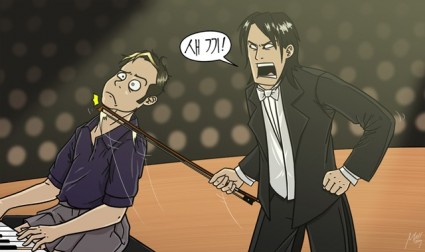 Here is a very special, most eloquent fanmail we got on facebook the other day:

“hi guys I’ve looked at your progranma on the internet and seriously I love especially I liked the episode when etab learner to play the piano and started playing maestri the song that the student and the teacher could not play it very quick and is a student almost makes the pants of how good he was. Congratulations!”

Well, thank you Amado Rolando Dominguez Amaro.The picture you see here, by the way, is by the seriously talented Malini Wan from Malaysia. There are more pics where that came from and we hope to see a lot more of her great talent still. Stay creative all you wonderful people out there!

We ourselves have some more fabulous performances coming up – beautiful Florence on the 6th of April, followed by fantastic Istanbul and delicous Ankara on the 9. and 10. of April. Midem sırtıma yapıştı!

Welcome to our new homepage!

Hi guys and gals, welcome to our new homepage… so whats different? Well, we tried to “keep it real” and simple, not overladen with stuff that takes 7 hours to download, at the same time as having more space for you to add your comments and a much nicer message board, we think. And it looks a tad more snazy in our eyes. But then again we are nearly blind and our right hand hurts.

ANYWAY, we do hope you leave your comments here, come to our performances and sing and dance with us like Hungarian sheep-monkeys! (We made those up just for you own personal amusement.) Have fun and ENJOY!